May the 4th Be With You, With New Han Solo and Iron Man Limited Editions

May the 4th Be With You, With New Han Solo and Iron Man Limited Editions

First of all, a huge THANK YOU to everyone in the wake of last month’s presales of the Poe Dameron #1 black-and-white and Black Panther #1 Negative Space limited editions. Your response was tremendous, and the first half of April passed in a wild blur of boxes and shipping labels as we were getting everybody their orders. I can’t tell you how much I appreciate your patience and your enthusiasm for these variant covers. That’s my reward right there.

I hadn’t been planning to do another variant for a while, but as my dad always says, “You have to make hay while the sun shines.” Yes, the dust has hardly settled from last time, but I’m ready to rinse and repeat this craziness next month, because I’m thrilled to announce TWO MORE LIMITED EDITIONS (and they’re doozies):

Both will be available for presale on May the Fourth (be with you), just two days before Marvel Studios’ hotly anticipated “Captain America: Civil War” opening!

In addition, I’m pleased to offer a graded signature series version of the new Han Solo edition with a guaranteed CGC grade 9.6 or better. You’ll get a signed book that we’ll have certified and encapsulated for you. Ordering here will probably be the fastest way to get a signed, graded copy of this variant!

Finally, I’ve got some FREE downloads for you as well. Details at the end of this email!

But first, let me tell you about the books.

May the 4th be with… the coolest Han Solo ever!
Don’t get me wrong, Han Solo is always cool. He’s Han freaking Solo. 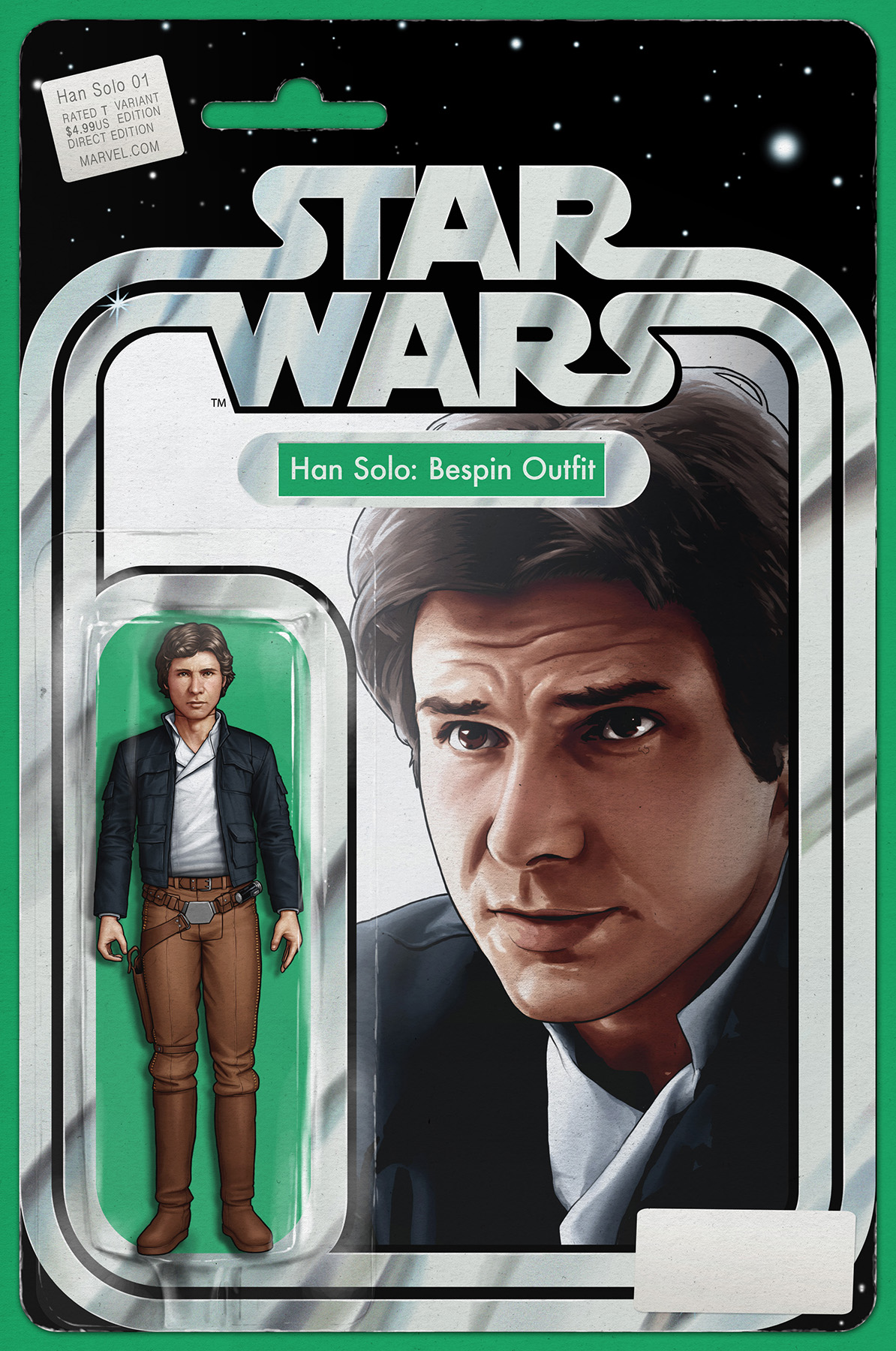 But for this variant of Han Solo #1, we’re talking Han from “The Empire Strikes Back.” We’re talking Cloud-City-cool Han (and I don’t mean the frozen-in-carbonite thing). It’s that dark blue jacket and the swagger. There’s no doubt about it: Bespin is the new black.

I’ve really enjoyed creating the Action Figure covers, from the first Luke Skywalker and the original Han Solo variants I did for Star Wars #1 and #2, to the color and black-and-white Boba Fett versions, and finally to this one—my second full-color Star Wars Action Figure variant, Han Solo.

For me, the series recaptures all the original excitement of discovering Star Wars as a kid and actually playing with these little plastic toys, with not the foggiest idea that they’d be worth a killing later if I’d just left them in the original packaging. It’s too late now, but it’s not too late for the limited edition covers. Especially if you didn’t get your hands on the Han Solo Star Wars #2, this new variant does let you collect them all.

Iron Man: The “negative space” series continues!
Civil War and I have a past. Did you know that? 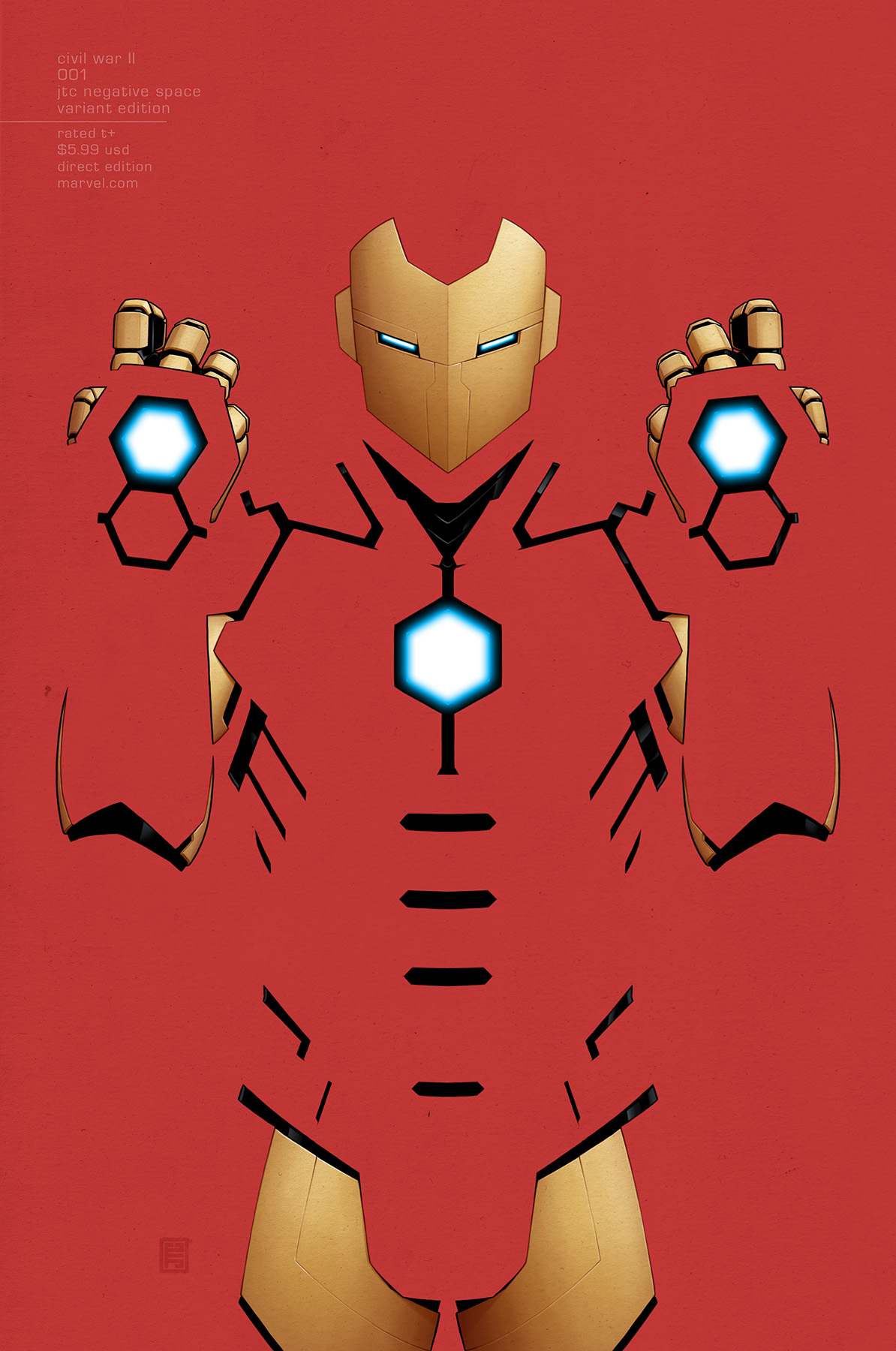 Back in the day, before I’d ever really touched a comic book page, I got to watch the renowned inker Dexter Vines working on the original “Civil War” comic. It was the first comic book I ever saw being created, and it was a mind-blowing experience!

The rest is history, but now you know where it all started.

This variant cover lets me bring together an awesome character and a beloved art style that I’ve been refining over the years. I know I’ve raved to you before about 19th-century illustrator Coles Phillips. His signature use of negative space in his art has inspired me to push the limits of comic book cover art. I’m proud of the “negative space” series, and Iron Man, with his arc reactor core, lends himself incredibly well to the style. It’s all the more exciting that I get to bring Iron Man to you on May 4, two days before Marvel Studios’ blockbuster “Captain America: Civil War” hits theaters. Did I mention that already? I’m kind of excited about it.

Note that Civil War II #1 is a big, fat, juicy double issue with a full 56 pages. As a bonus, we’re still offering it at the $10 price, although the size affects shipping costs a little. Still, it’s more fun reading for you, comics fans!

How will presales work?
We’re organizing the presale process a little bit differently this time around. Rather than have a pre-pre-sale like before, I’m promising one copy of each limited edition to every one of my past customers who’s interested in getting one during the presale.

It’s my way of recognizing your ongoing support of my work, and really, it’s only fair. When the black-and-white Boba Fett Star Wars #7 sold out in just 13 minutes, lots of dedicated fans missed out, especially depending on their time zones. You shouldn’t have to do a virtual Kessel Run in under 12 parsecs just to get your copy, know what I mean?

This time around, there’ll be no need to merge orders and wait for shipping refunds! If you’ve bought from us before and you place your order within the first 24 hours of the presale, you WILL BE GUARANTEED ONE COPY OF EACH LIMITED EDITION, regardless of whether we’re sold out or not!

If you have any questions about shipping, check out our FAQs. I’d also like to add that our humble operation learns a ton with every sale, and the last round was no exception. We’re trying very hard to make our sales and shipping process run more smoothly and efficiently, to give you the best experience possible.

Stay tuned for more details, and save these dates!

Comments are not allowed